01 Self-healing Power: It is about “Healing yourself”

I must thank my family and friends who gave me support... 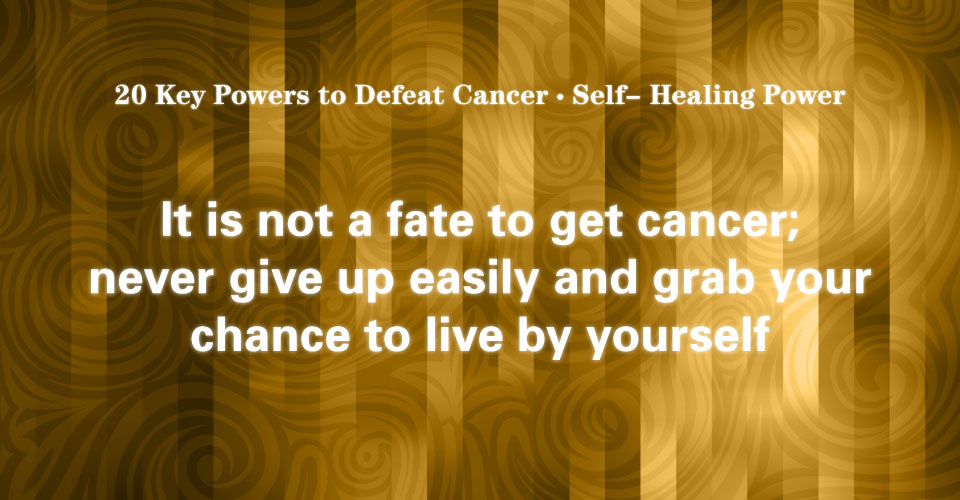 In the middle of the workday, I suddenly felt distress in my chest; I could not swallow food such as rice and tofu. I went to the hospital for an examination. The doctor told me cancer cells had invaded my esophagus. That year I was 58 years old. An “instant blank” can describe the shock I was hit with at that time, and this description is not an exaggeration. The attending doctor advised me to have surgery. The plan was to first use anticancer drugs and radiation to shrink the tumor in my esophagus from 6 cm, the same size as a sausage, to half that size. And then to operate with a removal surgery. This was the standard treatment for general cancer.

After I went home, I did not want to tell my wife the bad news but the date of hospitalization was imminent; I had to tell and explain to her. My wife was shocked when she heard. We looked at each other and I saw her tears. I could not bear it. I cuddled her and comforted her. At that moment, I was thinking I had to live for my wife’s and daughter’s happiness. I could not leave the stage of life so quickly! I comforted my wife and said, “Don’t worry; it's not a big deal. As long as I have the removal surgery, I will be cured.”

My wife was startled for a moment and said, “Untrue! Anticancer drugs, surgery and chemotherapy are very harmful to your body. Indeed, they are no guarantee that the disease will be cured. If you undergo the surgery, you are still only waiting to die.”

So what should I do? The degree of my fear and trepidation was getting deeper. My wife thought for a moment then said, "I grew up watching my father practice medicine. According to what I have seen, there is a method that may be working." I could not wait to ask, “What is it?" “Chinese medicine should help. I have seen it in many cases.” I was very disappointed when I heard this answer, and blurted out, “Those herbal remedies, what can they do? They can only delay my condition.” It was information that I had gathered from many medical reports. "I do not mean herbal remedies. I meant Chinese medicine prescribed by qualified Chinese practitioners,” my wife explained. But I did not listen, storming into my room and laying down on the bed.

I tried to calm myself down but I could not. Conversely, I felt sad. I did not understand why my own wife could suggest treating her husband’s life in such a reckless way. Did she care for me? In fact, I did not know my wife was heartbroken and slumped in a corner sobbing silently; she had been afraid that I would hear her crying. Later, she asked her father, my father-in-law, for information about Chinese medical treatments. All of our relatives and friends suddenly mobilized, and everyone tried hard to gather all kinds of cancer information for me; they prayed for me. Their love become a strong current of love which infused my heart. The information that they collected gave me great help later on. About all these affairs, I knew and learned more about later on.

Taking a Good News as a Funny Thing

Later, I felt ashamed of all the misunderstandings between my wife and I. My wife and I had a good relationship and we loved each other. However, we had arguments due to my terrible disease (cancer) and our different views on treatment forms. My wife endured all my misunderstanding of her in order to stop the cancer from taking my life; she worked hard finding survival methods so that I could live on.

My doctor urged me to be admitted to the hospital quickly; I started by accepting the anticancer drugs and radiotherapy. Thereafter, my nightmare began. After I underwent several courses of treatment, my body started to change. I was suffering from various sequelae. My wife took care of me meticulously. Sometimes when I was moody, she would say, “Why not try Chinese herbal medicine?” But I ignored her, as I was not convinced.

One day, the doctor finally came and told me they were going to schedule the surgery. After the doctor left; my wife cried and said, “Surgery may not be the best way. Why not try Chinese herbal medicine? Maybe there is a better way…” I interrupted and sharply rebuked her, “Don’t start with that bullshit again. You dare to ignore the doctors? You think that you're better than the doctors?” My wife was being scolded by me and was crying at the desk. In the following few days, we often argued about this same subject.

One day, I felt more vital so I sat in my hospital bed and turned on my computer. I had brought my notebook computer with me to the hospital because I needed it for my work and sometimes to kill time as well. My wife was beside me and said, “Why not search for some information about cancer treatment on the Internet? Check out some successful cases of fighting cancer, and see what other cancer patients did in their cases to win. We can follow the methods they used, and you should recover.” I thought so too. Meanwhile, I regretted my rude behaviour toward her a few days before. Therefore I said, “Sure.” I used my notebook, connected to the Internet and searched for cancer survivors. Since then, I have felt like I entered in another wider anticancer place.

I searched and got results for a lot of esophageal cancer therapies, including some articles published by medical associations. It was inscribed that “esophageal cancer surgery is extremely difficult, its surgical success rate is only 20%.”

Esophageal cancer surgery is a major operation and there cannot be a miss. During an open esophagectomy, first they open the rib cage; possibly making incisions in the neck, chest and abdomen. Then the removal of the entire 40 cm long esophagus and cut off the stomach nerves. Using the original eggplant-shaped stomach to reshape it into a tubular form to replace the esophagus. Now, a reconstructive surgeon needs to rebuild the connection between the esophagus replacement and the throat. Usually, there are three methods:

1. Go along the spine, moving the reconstructed stomach closer to the throat and rebuilding the connection.

2. Go through the inner side of the sternum.

3. Go through the front part of the sternum.

Under such circumstances, I think we should all understand that no matter which method you choose, the surgery will entail injury to the surrounding areas, like the heart and lungs, which are core life organs. Even though the stomach (the replacement esophagus) can be lifted up, the thickness of the throat and stomach wall are different. In fact, there will be some inadequacies in the joining. Therefore, the patients will often experience sequelae, complications and difficulty eating after surgery. As the replacement esophagus, the stomach is pressed on by the sternum, resulting in dysfunction and flatulence. Since the stomach is weak and has no resistance to bacteria, patients will have severe post-surgical weight loss and a loss of appetite.

During that period of time, I saw some patients who were in the same age range as me. They passed away, in pain, due to respiratory issues, complications and infections. I grieved timelessly and thought, “No matter what, I have to flee from this cruel treatment.”

I thought that I should have “cancer treatment without surgery performed” and through the Internet, and word of mouth, I exerted myself in looking for Chinese medicine and healthy food.Fighting cancer is like fighting an intelligence war ── The Internet, my wife and my friends are my “life support”.

It is difficult to understand “fate” or “luck” which is separated as though by a piece of paper.

I exerted myself in searching worldwide for cancer-related websites on the Internet. Fortuitously, information on the TXL Hong Kong website popped up. It described that TXL had a particular efficacy with gastrointestinal cancer. Then I read the developer’s commentary. He mentioned: “Combine it with anticancer drugs and radiation, the rate of a cure for cancer can be up to more than 80%.”

I was skeptical but still I quickly asked my friend, who was good at English, to ask about TXL for me. Two weeks after my hospital admission, I received a TXL parcel, mailed from Hong Kong to me. Right at that time, I was suffering from diarrhea and vomiting, side effects caused by anticancer drugs and radiation. Therefore, I took TXL without telling my attending doctor.

The side effects caused by anticancer drugs and radiation are horrible. In addition to producing vomiting and diarrhea, the side effects debilitate the immune system and make people weak. They do not even have the strength to live. My radiotherapy used LINAC (Linear Accelerator) to generate radioactive beams delivered from outside the body; followed by RALS radiotherapy (Remote AfterLoading System) inside my esophagus, using external radiation. After I received these therapies, I frequently experienced dysphagia. It is needless to talk about eating rice, I even had difficulty taking liquid medicines and health foods.

Fortunately I had the anticancer compound Chinese medicine, TXL, brought from Hong Kong, and “SOD Series Food”. Neither of them caused any discomfort when I took them and they passed down my throat. The “SOD Series Food” was powered from raw materials such as germ, soybean, rice bran and adlay seed. This healthy nutritional supplement was developed by Dr. Yukie (Kozo) Niwa, a physician at Tosa Shimizu Hospital in Shikoku. “SOD” is the abbreviation for Super Oxide Dismutase. It is a type of antioxidant enzyme. It can suppress our bodies' production of excessive ROS (Reactive Oxygen Species). ROS will damage normal organs and cells. It is the culprit which causes cancer. I heard that my wife’s cousin had been diagnosed with lung cancer, and when his doctor told him he had only half of a year to live, he continually took this powder. As a result, he lived five more years. That is why I bought it and took it. I also heard that my relative's (Brother Jue lun) girlfriend also took this powder to prevent breast cancer from recurring. I have continually taken this powder supplement, with a thought treating a dead horse like a live horse.

The original 6cm tumor, the same size as a sausage, in the lower part of the esophagus was gone during an endoscopic imagery examination. Would that be the integrative effect of using the combination of “radiation” (LINAC + RALS radiotherapy), “anticancer drugs” (Cisplatin+5FU), “TXL” (anticancer compound Chinese medicine) and “SOD” (antioxidant nutritional food)? After one and a half months, my sausage sized tumor had surprisingly disappeared from the endoscopic and X-ray examinations. It was a “miracle”!

I was so happy I could eat delightedly, I could “say goodbye to the terrible cancer surgery”. In medical terminology, it was not a complete cure. The cancer was only in remission (the signs and symptoms of cancer were gone). My doctor threatened me and said, “If you are discharged like this, you will have a recurrence of cancer in seven or eight months,” and “You should have the surgery.”

I thought that the reason my situation had improved should have been because of the effect from “the combination of anticancer + radiation + TXL + “SOD Series Food” ”. And then, I just needed to use Chinese herbal medicine or healthy food as an alternative therapy for prolonging my life. Therefore, I firmly said “No” to surgery. Two days later, I was fleeing and packed my stuff to be discharged from the hospital.