If you can get successive hits, then you can score. 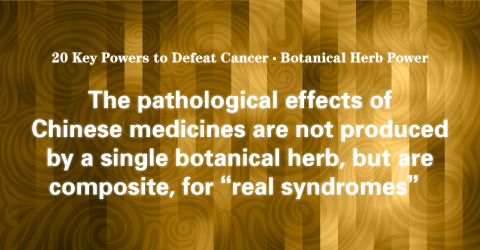 Ten years ago, I was discharged from the University Hospital. I had undergone many rounds of outpatient radiation therapy over the course of a month. After that, I survived with “the power of Chinese herbal medicines”. I took the anticancer compound Chinese medicine TXL developed by ZhenGuo Wang every day, and I took “a decoction of crude Chinese drugs” deployed by Dr. Obitsu Ryoichi. Fortunately, I am “healthily alive”.

Besides single crude drugs, there are complex combinations of compound botanical herbs, acupuncture, massage and so on.

What are the Differences Between Chinese Medicine and the Treatments of Western Medicine?

Western medicine is focused on the particular causes of diseases, and then on removing organs. TCM works through the body to correct imbalances in order to restore one's original health.

Western medicine only focuses on organs, cells, genes and those visible parts of the human body. If we are unable to integrate and interconnect all organs, cells and genes during treatment, it cannot be called a real treatment.

In other words, the features of Western medicine are first to determine the particular body components that have problems, and then employ surgery, chemical drugs and so on to destroy them. The features of TCM are focused on the whole body's balance; adjusting and balancing the interrelationship that is formed within bodies. TCM's focus is on exerting the inherent, naturopathic self-healing power of human beings during treatments.

TCM's Features of Diagnoses and Treatments

Western medicine →→ Pathological identification based on examining data and use of the same drugs for
patients with the same disease.

TCM →→ Diagnoses based on meticulous observations (diagnosis) of "syndromes" to make an overall judgment,
and then prescriptions are written based on personal differences in the body.

What is the Botanical Herb Power of Chinese Medicine?

So far, we have mentioned botanical herbs, single crude drugs and Chinese herbal medicines. Strictly speaking, single crude drugs refer to active pharmacological ingredients, such as parts of plants, animals and minerals and the drying, decocting and processing of them for use. Most Chinese medicines are botanical herbs, and most of them are naturopathic botanical herbs = Plant roots and tree bark. There are approximately six thousand kinds of herbs. When a prescription employs several crude drugs, generally it means it is “Chinese herbal medicine”.

Six thousand kinds of botanical herbs = Single crude drugs. Due to space constraints, I cannot verify them one by one, therefore, I will analyze the Chinese herbal ingredients in the decoctions that I took every day, prescribed by Dr. Obitsu for me. Meanwhile, I am going to explore "the secret of botanical herb power”.

An Endoscopy Examination in the Ninth Year, a False Alarm that Made Me Panic a Bit…

Since I had four different ulcers in my stomach, I wondered, “Do I have gastric cancer?”

Someone told me: "Gastric surgery is very simple. Do you want to have surgery?” but I did not have any abdominal pain, I had good appetite, I slept well and my defecation was good, so I refused surgery. I believed in the power of botanical herbs. Dr. Obitsu also changed the original composite formula of my decoction. Three months later, the result of an examination showed that it was not gastric cancer and so I felt relieved.

During this long period of time dealing with cancer cells, I was made very aware of my own body and physical condition. There was the onset of disc herniation, and when the seasons changed it caused chills in my body and other physical discomfort. Later, I had problems with my stomach nerves but because of botanical herb power, my health was rapidly restored, and my esophageal cancer was cured. Now I am using the following botanical herbal combinations:
(One gram = One time boiling) :

The power of botanical herbs = Pharmacological effects: What are they? Now let’s review !

Dr. Obitsu said, “Chinese medicines produce “synergistic power”, which exerts the power of inhibitory effects against cancer and improves symptoms” ── these are the characteristics of TCM.

About the Boiling Methods of Botanical Herbs

Nowadays there are simple automatic decoction pots. Attention must be taken that the pots and containers are not made of iron; it is better to use clay pots. Put a one-day sized portion into the pot and add 500-600cc of water. Boil it for approximately forty minutes until the volume is halved. Then filter it with a tea strainer or cotton gauze, and serve. For storage, use a bag made from anti-insect, anti-mildew and anti-corrosive material. Avoid direct sunlight and store it in a well-ventilated, dry place.