The "macrobiotic power” launched by a group of young ladies. 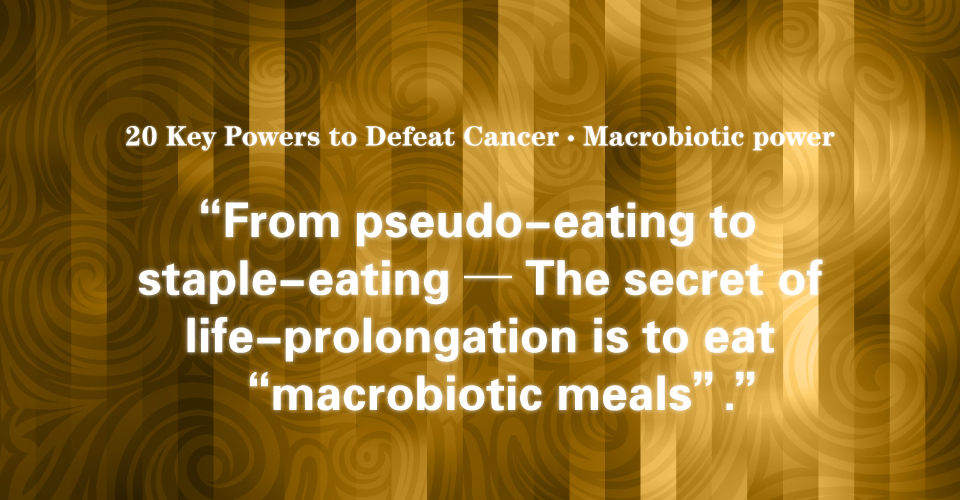 A lot of people suffer from metabolic syndromes or chronic diseases when they are older, such as cancer and hypertension, caused by Western-style food and eating until fully satiated. Because of issues like “Western-style food”, “eating until satiated” and “pseudo-food”, people are unable to guard and protect themselves from depraved eating habits and eating contaminated food, and eventually they are never able to achieve “healthy longevity” and “healthy youth”. For older people who have indulged in “Western-style food”, “satiated eating” and “pseudo-food”, in addition to cancer and hypertension, the risk of Alzheimer's disease is increased; this could cause them to suffer until the moment of death. More and more seniors are unable to “live healthily and vivaciously”. Additionally, their lives may end in a situation where they lie in bed, with feeding tubes inserted into their noses.

Health and Peace: The "Macrobiotic Power” Launched by a Group of Young Ladies

In this book, I have mentioned that the longevity macrobiotic meal approach which prolongs my life is a kind of herbal dietary therapy using botanical herbs. Previously, I had introduced the dietary philosophy of “herbal dietary power”, “Yin-Yang power” and “Shen Tu power” in a longevity macrobiotic meal approach. Over these past ten years, I have read the books of Mr. Ishizuka Sagen and Mr. George Ohsawa, and have been following their practices every day. Sometimes people sarcastically say that I am eating rabbit fodder but as the days passed, I gradually discovered that it is not just a dietary method or a health regimen. As the name longevity dietary regimen indicates, it is “the great philosophy of life” that can change our future lifestyle and reform society.

Although it is impossible to hear the insights of Mr. Ishizuka Sagen and Mr. George Ohsawa directly, the ancestors of the longevity dietary regimen approach, Mr. Okada Teizo, as their disciple, practices what they preached and puts their theories into effect. As for me, I am so happy and honoured to have received instruction and guidance from Mr. Okada Teizo.

How to Cure “The Long-lived But Sick Society” Caused by the Invasion of Japanese Bodies And Minds?

In regard to this point, the May issue of the quarterly magazine, “The Life Guide Book”, issued by the SlowHealth Research Association, contained an article written by Mr. Okada Teizo, the chairmen of the Macrobiotic Society, to further elaborate on it. This May special issue, “Diet Decides Destiny”, began with Mr. Okada Teizo’s article titled “Health and Peace ─ An Internal Revolution on Reforming the Staple Diet” to explain how the Japanese and Japan should re-recognize the seven principles of “health and peace” and do a “self-check”. It is very easy to understand. If you have the chance, be sure to read the article. I will just briefly explain it a little here.

Here Are the Partial Contents of Mr. Okada Teizo’s Article:

These are not esoteric medical theories; everyone can understand these seven principles of true health. Mr. Okada used the following “self-check” test to question many readers. You can give it a try.

I heard that after a few months of eating the staple diet, people experienced physiological changes. Some people have a huge psychological charge with a feeling of being reborn. The most gratifying part is that many members say that they will introduce what they have learned to their friends, and the people around them. Everyone may gradually remove their self-centered thoughts and move toward altruism, thinking for the sake of others. These young ladies are practising “health and peace”, step by step.

Many people say, “brown rice is not tasty” or “it is very boring to only eat carrots and burdock”. It felt hard initially but my wife continually put much effort into making dishes for me. Eventually, I got used to a light, natural flavour without artificial seasonings. It was not hard to suppress my cravings for deep fried pork chops and cheese. I simply do not want to eat foods with bad smells, including smoking cigarettes and drinking alcohol that I was crazily addicted to when I was young and strong. Now when I smell cigarettes and alcohol, I get a headache. I feel that I have a strong constitution and am unlikely to get sick. I am not a monk, of course, and I do not place restrictions on my food. I also enjoy simple cuisine in restaurants. Therefore, my wife and I will go out to eat medicinal dishes or Japanese cuisine once a week. I believe that if people are unable to have healthy longevity and live a happy life, it is meaningless to be alive.

Put more time and effort into cooking; then macrobiotic meals will be delicious. Cooking brown rice with an electric rice cooker seems to lessen the flavour. How do you cook delicious brown rice, full of rich flavours, and a miso soup with a lot of vegetables? There are secrets to it. The first step for life-prolongation is to learn how to cook macrobiotic meals.

13 Detoxification Power: Defecation That is More Important Than Eating