Definitely, they have the power to be the guardians of life. 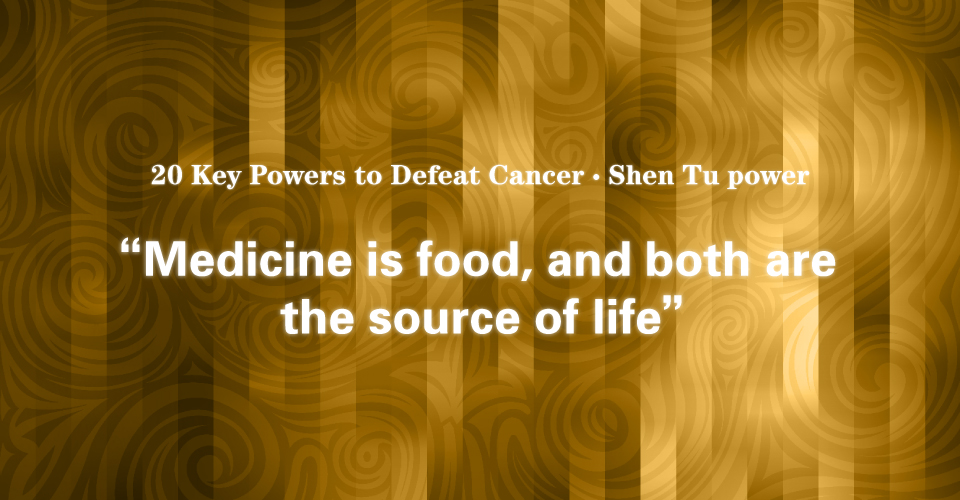 To everyone, take note it is important to remember the key words “Shen Tu power” of health and longevity. In the previous chapter, I mentioned the four main principles of the longevity macrobiotic dietary regimen approach. One principle is “Shen Tu Bu Er” (Chinese: 身土不二) = the “body and the earth should be united as a whole”. Originally, it is Buddhist phraseology. The earth refers to the land and it represents our hometowns. It implies Shen Tu power. The meaning of Shen Tu power and “Shen Tu Bu Er” is getting vitality power by “eating local food that are produced locally”.

People should not just focus on the price, the quality and the environment, they need to interact with the local people who make food. This is not just for diet alone, but to improve the Japanese lifestyle and lead a whole life. If people are unable to re-comprehend these new values from the fundamental, then everything will be just a fashionable trend. The idea of local production and consumption is derived from the concept of “Shen Tu Bu Er”. Now, when walking on the road and getting a closer look at the surroundings, all the food they sell in supermarkets or serve in restaurants has pesticide residue or contains additives. For this reason, we have gathered patients and their families, doctors, news publishers and organic farmers from different places to form an organization, the “SlowHealth Research Association”. Our purpose is to remind everyone to re-recognize the meaning of “Shen Tu Bu Er” and to understand Shen Tu power.

“Slow Health” indicates “the slow health therapy for mildly easing body and mind”. The SlowHealth Research Association works according to the concepts of “Shen Tu Bu Er “= The earth and the body in one, to expand and develop “the vital land of diet”. Therefore, we recommend connecting consumers, businesses, farmers and everyone with similar “Slow Health concepts and goals” to build “dietary life-chain”. Indeed, we diligently practise and campaign for “dietary life-chain”.

In the fifth quarterly magazine of the SlowHealth Research Association, Mr. Hanai published the article below, with the title: “Self-Sufficiency of Food ～ Tokyo 1% and Osaka 2%. What is the Guardian of Life Within the “New Local Production and Consumption Network”?

“When we talk about food journey in environmental issues or the ideological fundamental of food miles in Japanese ways and terms, it means that we should eat local food that is locally produced, and which actually is the “Shen Tu Bu Er” which we have often discussed. Putting it into today’s terminology, it is local production and consumption. When cooking dishes, cook the whole vegetable including all its roots, skin and leaves. This can reduce and even solve the garbage problem. From a second point of view, it is best for the body to eat seasonal and local food. Therefore, the best life is one that does not rely on imported food. Further, it interlinks to the pacifist concept of not infringing on other countries”.

Why “can food nurture life” or should we “eat seasonal and local food”? Everyone should practise the wisdom of “Shen Tu Bu Er”, starting from their own heads to toes, to reduce our reliance on imported food and environmental damage ── This is how we, the Japanese, can stand on the land to practise a deep level of such ecological concepts.

Maybe some people have suspicions and say: “All of this is just the mouthy justifications and arguments of a cancer patient.”

But for the concept of “the earth and body in one”, I strongly believe that this is the key that will change the lifestyles of all Japanese in the future.

The term “sick with longevity” has become the key cause of our perturbation and the concern in our hearts, and it is a nasty term. Anxiety is not just raised because of the cancer rate, where 1 out of 2 people will suffer from cancer. It lies also in the aging population: now, 1 out of 5 people are aged 65 or older. In 2055, the average ratio will increase until 1 out of 2.5 people will be aged 65 or older. It is an aging society, with less youth and more concerns – What about annuity and medical expenses? What about health care? … all these concerns become the burdens of the government and are piling up. Whether people are healthy or sick is a problem, and “the disparity of life” is another problem. Our society might become cruel and heartless; with ideas like “poor people unable to receive medical treatments” or “elderly people going to die early!”

Now, education cannot be built on just morals and ethics, even the “food education” (education of diet) that people urgently clamour for. I believe that this is a move in the right direction, but I still feel that the recent reforms are a flattering advocation of American meat. The problem is that so far, no one has stood up from the “food education” standpoint, to demand for “Shen Tu Bu Er” for the Japanese, and that the land of Japan should be united as a whole. I personally believe that the food education concept of “Shen Tu Bu Er” and a diet mainly of macrobiotic meals is the ultimate prescription to transform the sickness and the longevity of the country.

The Japanese should be gradually alerted to the Import Policies on American food and the imitation of an American form of life with excess meat, fat and sugar intake! Even Americans are now vexed by the problem of obesity. Indeed, they have started to re-revalue “Japanese food” and “vegetarian food”. The United Kingdom had an even lower self-sufficiency rate of food than Japan, but in the past thirty years, it has successfully increased the self-sufficiency rate of food to 25%. This is because the Government of the UK realizes and believes that agricultural products provided by their own should be one of the significant rungs of the food chain of “geographical environment + food + life". Therefore, the original responsibility of the Department of Agriculture, Forestry, and Fisheries will be transferred to a newly established unit, the Department for Environment, Food and Rural Affairs.

No matter what happens in the future, it is impossible for Japan not to rely on importing food from other countries; there is no effective way of solving the problem of food contamination from pesticides and food additives. The current priority should aim to revivify the inherently fine tradition of “Shen Tu Bu Er” as a modern trendy tradition in the future. Additionally, we must begin to change concepts within our own dietary education first.

13 Detoxification Power: Defecation That is More Important Than Eating